The following history came from a combination of workshops and conversations with Reiki Master researchers over the past 30+ years as well as personally viewing Mikao Usui’s Memorial inscription in Japan. General references are listed at the end of this article.

Who Developed the System of Reiki? 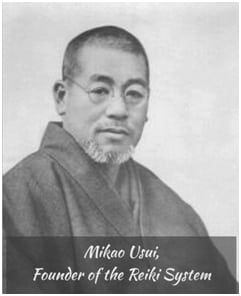 Usui Sensei studied many religious and esoteric practices in search of spiritual awakening. During a 21-day fast and meditation retreat on Mount Kurama in the outskirts of Kyoto, Mikao Usui received satori (Japanese term for awakening), birthing the healing art and spiritual practice of Reiki Ryoho (Reiki healing method).

What we now call Reiki started as a method to achieve Enlightenment – Anshin Ritusmei. Usui Sensei was influenced by the teachings of Buddhism, Shintoism, and martial arts to support the development of a person’s spiritual connection. Although some Eastern-based concepts and techniques are part of the Reiki system, Reiki is not affiliated with any religion.

The Passing of Reiki from Teacher to Student 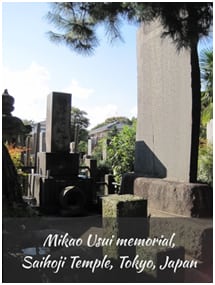 In 1922, a healing dojo was formed in Tokyo named Usui Reiki Ryoho Gakkai, which means The Usui Reiki Healing Method Society. (This society is still active today.) As Usui Sensei gave treatments and instructed public classes on his system of healing, his reputation spread throughout Japan.

Students of Usui Sensei erected a memorial in 1927 at Usui’s gravesite in Tokyo, one year after his passing. Much of Reiki’s history is etched in this memorial stone.

Before he died, Usui trained several Reiki Masters to ensure his healing system would continue on. Chujiro Hayashi, a retired Japanese naval officer with a medical background, is believed to be the last Shihan (Reiki Teacher) student of Usui Sensei.

Hayashi opened a Reiki clinic at the request of Usui Sensei where he offered Reiki treatments. Those interested in becoming Reiki students received training by volunteering extensive hours in Hayashi’s clinic. He added structure to the teachings by creating a treatment manual and system of giving Reiju (attunement). He encouraged students to receive Reiju from their local teacher on a regular basis.

Outside of his clinic work, Hayashi alsotaught Reiki throughout Japan. His most famous students were Chiyoko Yamaguchi and Hawayo Takata.

How Takata Brought Reiki from Japan to the West

Hawayo Takata was born on December 24, 1900, on the island of Kauai, Hawaii. She is believed to be one of Hayashi Sensei’s last trained Reiki teachers.

Takata’s parents were Japanese immigrants. While visiting Japan, she sought help for health conditions she was experiencing. Rather than have an operation, she visited Hayashi’s Reiki clinic where she recovered completely after receiving regular Reiki treatments for several months.

Inspired by her recovery, she asked to learn Reiki to continue treating herself and to take the powerful healing method back to Hawaii. Mrs. Takata studied Reiki with Hayashi Sensei beginning in the mid-1930’s, becoming his first known western student.

On February 21, 1938, Hayashi Sensei initiated Takata as a Reiki Master. This action took Usui Sensei’s Reiki system from Japan into the West, allowing Reiki to gradually spread around the world.

Takata Sensei is credited for not only bringing Reiki to the West, but also possibly maintaining its importance.

After World War II, the U.S. required all healing practices in Japan to be regulated. The Gakkai (Usui Reiki Healing Method Society) decided they did not want that external control and chose instead to go underground. This made the practice of Reiki difficult to find out about in Japan. It also led to a decline in membership in the Gakkai.

Meanwhile, in the U.S., Takata Sensei became a great promoter of the practice of Reiki throughout Hawaii and then to the U.S. mainland. She trained 22 Reiki Masters from 1970 to the time of her transition on December 11, 1980.

The Development of Modern Reiki

Two of Takata Sensei’s Reiki Master students, Barbara Weber Ray and Phyllis Furumoto (who was also Takata’s granddaughter), were recognized as her successors by two separate groups. In 1983, The Reiki Alliance was formed with Phyllis Furumoto heading the organization intending to preserve Takata’s style of teaching Reiki. 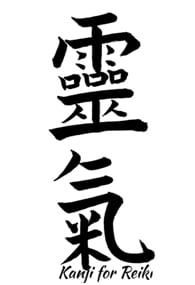 Independent Reiki branches began to emerge due to style and practice disagreements that arose among Takata Sensei’s 22 Master students after her passing. Workbooks were created, note-taking was allowed, more reasonable fees were charged, and many students began studying with more than one teacher—all in contrast to Takata’s teaching style.

Some of the more well-known U.S.-based Reiki style offshoots include Usui/Tibetan Reiki and Karuna Reiki created by William Lee Rand. David Jarrell created his personal expression of Reiki with Reiki Plus. Other highly experienced Reiki teachers have not distinguished a separate name for their style, instead continuing to call it simply Reiki, while offering their unique blend of teachings.

In April 1993, Frank Arjava Petter, a German Reiki Master initially taught in the Takata lineage, began teaching Western style Reiki in Japan. With this move, the practice of Reiki had now circled the globe, returning to its place of origin. This action drew attention back to the Japanese styles of Reiki and how they were closer to the original intention of Usui’s teachings than those styles taught in the West.

As shown in the list below, there are now many styles of Reiki ranging from more traditional Japanese practices, to Western style Reiki in the manner taught by Hawayo Takata, and new age styles of Reiki which include elements like Reiki guides, chakras, crystals, and more.

Some of the most common styles of Reiki offered today are:

Teachers have added or removed aspects of the system of Reiki based on their personal inclination, which has led to both subtle and significant differences in how Reiki is practiced and taught.

Even so, Reiki in our modern world continues to be a powerful healing method with strong roots. Its popularity continues to grow as more and more people learn the method and receive its energy.

My thanks and gratitude to my teachers and these authors who influenced the writing of this post:

My gift to you, 3 Ways to Reduce Fatigue and Stress. 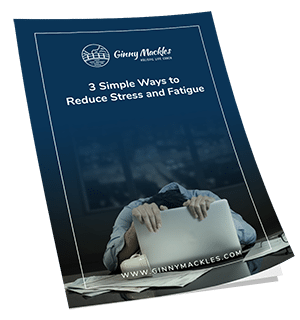 Enter your contact info and I will send it to you right away.

Ginny is compassionate and knowledgeable, with a true passion for her subject that inspires her students and clients! Thank you, Ginny, for transforming my life!

I have worked with Ginny in several capacities: I have gone to her for Reiki sessions and she has been my teacher. I studied Reiki I and II with Ginny and am now about to graduate from the mastership … END_OF_DOCUMENT_TOKEN_TO_BE_REPLACED

This presentation gave me ideas to be more mindful in my life and inspired me to be more health conscious.

A very useful program. I will start to use it immediately as a daily practice.

Ginny Mackles is an amazing Healer and simply a wonderful Person! Thank you so much for helping me at the time when I needed it so much. The whole experience was fantastic. I learned so much and reall… END_OF_DOCUMENT_TOKEN_TO_BE_REPLACED

Ginny has an amazing way of always getting me to see what the challenges are, where the blockages may be and how to resolve the issue. I have been able to grow and evolve through my work with Ginny.

Ginny’s breadth of her knowledge, her teaching ability and her commitment to the integrity of Reiki are exceptional.

Ginny Mackles is the rare teacher and facilitator who has the ability to empower her students and clients with loving support, wise advice, step by step training and most importantly, acute powers of … END_OF_DOCUMENT_TOKEN_TO_BE_REPLACED

I admire your skills and competence as a therapist, the best therapist I have ever had and one of the best therapists that I have known. I think your professional ethics are beyond the vast majority o… END_OF_DOCUMENT_TOKEN_TO_BE_REPLACED

Ginny is a wonderful Reiki Teacher! She brings so much integrity to her work. I learned so much from my many sessions and classes with her.

Take the Next Step

Reiki For Our Times

This LIVE on-line group Reiki gathering is designed for people who have been attuned to Reiki Level One or higher.  Three Monday evenings in January.

Ginny Mackles is a Holistic Life Coach, Reiki Master Teacher, Mind-Body Therapist and Board Certified Professional Counselor, LMHC, holding a NY state license in Mental Health Counseling with a Masters in Social Work. She specializes in working with individuals seeking to reduce stress, anxiety or depression, those looking for increased mental clarity and emotional well-being, and individuals wanting to live a more meaningful well-balanced life.

Click here to schedule an appointment with Ginny in-person or via Zoom for Life Coaching, Holistic Counseling, BodyTalk, or Reiki session, email Ginny or call 952-426-3525.

To sign up for a Class, Workshop or to book Ginny for a speaking engagement click here.